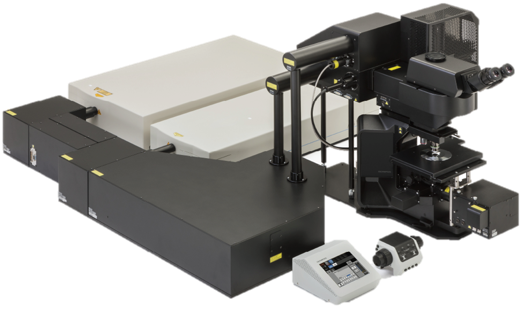 Two-photon absorption refers to the process in which the sample is excited by a light source with nearly 2 times the uv absorption wavelength of the sample under strong light excitation so that it can directly absorb two photons in a virtual intermediate state and transition to a very high energy state. Since the phenomenon of two-photon absorption was first reported, the research of fluorescence imaging technology has entered a new era. In addition, two-photon microscope is indispensable in biological imaging due to its advantages of small light damage, deep tissue penetration, weak background fluorescence and high spatial resolution. Two-photon dyes, as the core component of two-photon imaging technology, have been widely concerned and explored by researchers.

Chen Hua et al. [1] focused on spiral ring molecules, whose unique rigid plane can effectively inhibit aggregation formation. A kind of unique spiro-type two-photon fluorescent dyes (STP) were designed and processed. The study of absorption and emission characteristics of single and two photon shows that the new STP dye has good two photon characteristics. On this basis, the first HOCl fluorescent probe STP-HClO was designed and synthesized for HOCl sensing and imaging in living cells or tissues.

High-speed two-photon imaging is of particular interest to scientists because of its ability to visualize vascular dynamics, including changes in blood flow velocity and blood vessel diameter. This technique has played an important role in the study of the neuronal and vascular interactions (neurovascular coupling) associated with several neuronal diseases, cerebrovascular ischemic stroke, and tumors. High-speed two-photon imaging is important to elucidate the underlying mechanisms of brain diseases. Based on the compatibility of high-power and tissue-penetrating laser exciter, bright fluorescent probe and sensitive fluorescent probe, and the concentration of the fluorescent probe reaching the blood vessel, Takezaki [2] and his co-workers have successfully developed a novel nanoprobe for studying the vascular dynamic in the deep brain. The use of this nanoprobe allowed, for the first time, the observation of brain blood vasculature at a depth of 1.1 mm (from the surface of the mouse brain) under a high frame rate of 120 fps, enabling the direct observation of blood flow in the hippocampal CA1 region.

The development of two-photon imaging technology is of great significance to reveal the secret of life, clinical diagnosis and drug screening. If you are interested in this, you can read the references we cite in detail.