Dye-sensitized solar cells (DSSCs) are a new type of solar cells which use low-cost nano titanium dioxide and photosensitive dye as the main raw materials to simulate the photosynthesis of plants in nature and convert solar energy into electric energy. DSSCs comprise four key device components: a chemical dye, a working electrode, a counter electrode, and an electrolyte. First, the chemical dye absorbs light from the sun. Then, in its photoexcited state, the dye molecule injects an electron into the semiconductor electrode (usuallyTiO2nanoparticles) onto which it is adsorbed. The dye molecules absorb sunlight into their excited state, injecting an electron into the semiconductor electrode, creating a potential difference with the opposite electrode and generating a current. The electrolyte acts as a Redox medium, holding electrons from the opposite electrode and transferring them back to the dye to return it to its ground state, thus completing circuit closure [1].

Fig 1. Operational mechanism of a DSSC

In DSSCs, sensitizer (dyes), as a key component, undertakes the task of capturing photon excitation state and injecting electrons into the semiconductor electrode, so sensitizer directly affects the photoelectric conversion efficiency. Organic dyes are a popular choice for DSSCs photosensitizers because of their high molar extinction coefficient, low charge transfer loss, low cost and non-toxicity. However, the core problem of organic dyes is that the absorption band is sharp and narrow, which greatly limits the photoelectric conversion efficiency of organic dyes. Therefore, the co-sensitization of semiconductor electrodes with two or more dyes has become a very active field in DSSCs research and has great development potential. The co-sensitization of various dyes can theoretically solve the problem that organic dyes only cover part of the solar spectrum, so that DSSCs can achieve a panchromatic response of sunlight. 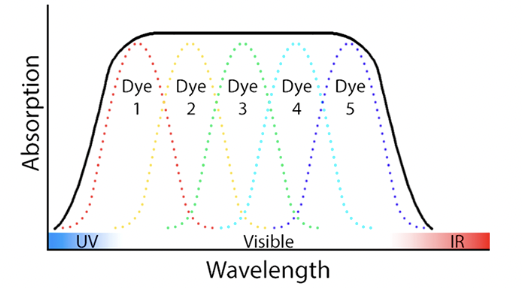 Fig.2 Schematic illustration of how the comparable absorption of more than two dyes with narrow bands of optical absorption may complement each other to achieve near-panchromatic absorption [1].

There are two ways to make a co-sensitization: cocktail approach makes the co-sensitization in a mixed dye solution with certain molar ratios of the two dyes, whereas the stepwise approach accomplishes adsorption of the two different dyes in a consecutive manner. With a cobalt-based redox electrolyte, the efficiency of the device made from a push–pull zincporphyrin (YD2-o-C8) attained 11.9%, whereas a system co-sensitized with an organic dye (Y123) boosted the cell performance to 12.3%, which is a new milestone in this research field, stimulating investigation of the development of key materials to promote the device performance [2]. Lan and his co-workers have reported a promising DSSC system based on a zinc porphyrin bearing two ortho-substituted long alkoxyl chains (LD12) co-adsorbed with a spirally configured donor–acceptor organic dye (CD5). Both JSC and VOC of the co-sensitized devices were significantly enhanced relative to their corresponding single-dye sensitized devices, improving the overall performance for the LD12 + CD5 device by 20% and 58% with respect to LD12 and CD5 single-dye devices [3]. 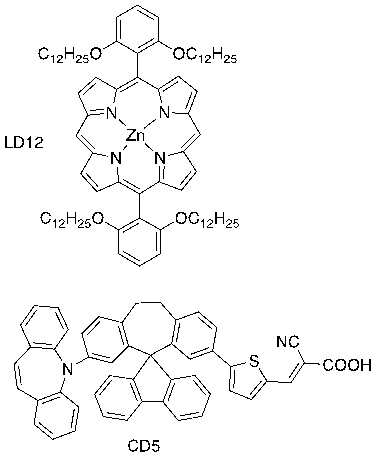 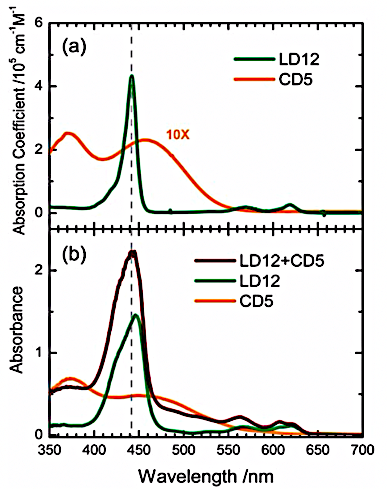 Wu and his co-workers have reported that they have designed and synthesized three new organic dyes (TD1–TD3) featured with donor–π–acceptor architecture and applied to dye-sensitized solar cells (DSSCs). The co-sensitization of TD1-TD3 with the transition metal Ruthenium complex N719 was further evaluated, and it was found that TD1-TD3 used in conjunction with N719 showed excellent photovoltaic performance compared with N719 alone. Among them, TD1 bearing a carbazole electron donor showed the highest PCE of 5.92% with JSC of 13.6 mA cm-2, VOC of 740 mV and FF of 58.9%. Furthermore, the co-sensitizations of these new dyes along with N719 were examined, and improved PCEs up to 8.02% were obtained with respect to that of N719 (PCE=7.29%) sensitized alone [4]. 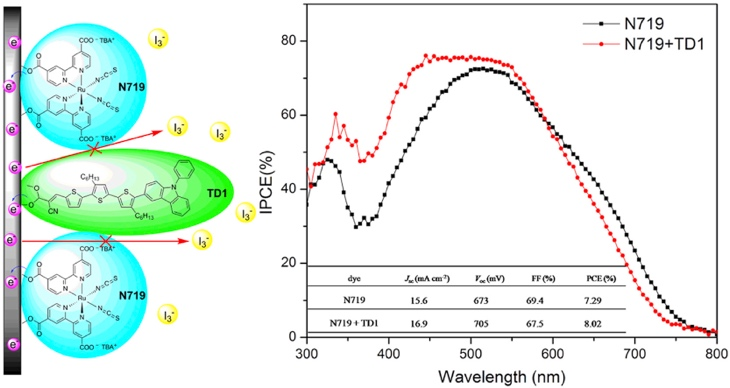