Fluorescent switch is an optical device that affects the fluorescence emission intensity of the system based on the change of some external factors. Under the stimulation of external factors such as light, heat, electricity and chemical signals, photoinduced electron transfer (PET), forming excimer, intramolecular charge transfer (ICT) and fluorescence resonance energy transfer (FRET) induce system fluorescence signals to appear "on" and quenching "off" change. In the past few decades, the fluorescent switch has developed into an intelligent function system and is widely used in many fields. 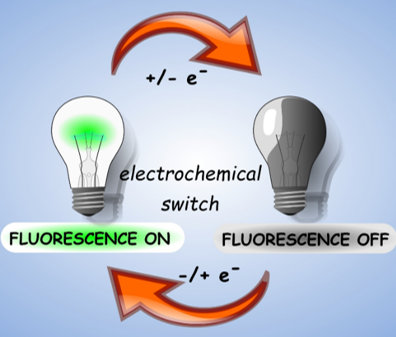 According to the reversibility, common categories of electrochemical fluorescence switch are as follows:[1]

Rhodamine derivatives are typical electrofluorochromic probes whose fluorescence can be reversibly modulated by electrochemistry. The study suggests that the radical of rhodamine 101 (R101) obtained upon mono-electronic electrochemical reduction, was non-fluorescent. Furthermore, R101 has fluorescent when the potential to a value positive enough to allow the re-oxidation of the radical. Interestingly, multiple on/off fluorescence switch events could be observed during several minutes, demonstrating the reversibility of the redox activation/deactivation process. 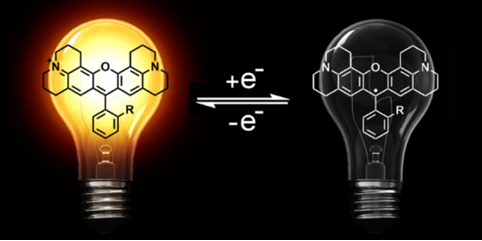 Though reversible electrochemical fluorescence mechanism plays important part in the field of electrofluorochromic devices, irreversible fluorescence mechanism can also apply in the biology, especially discrimination between species internalized and not internalized in lipid vesicles. This approach was recently developed to quantify amounts of cell-penetrating peptides (CPP) that had crossed vesicular lipid membranes. In a typical experience, the fluorescence emitted by non-internalized peptides was switched off through the electrochemical reduction of the NBD (7-nitrobenz-2-oxa-1,3-diazole) nitro group whereas internalized NBD-CPP remained fluorescent. Accordingly, the NBD-labeled peptides that had been internalized into the vesicles could be easily quantified from the residual fluorescence.

Figure 3. The electrochemical procedure allowed a clear discrimination between internalized and non-internalized CPP.

Alfa Chemistry's technical R&D team has focused on the preparation and application of fluorophore for many years, which has established long-term cooperative relationships with many well-known enterprises and research institutions. We have conducted research on various problems encountered by electrochemical fluorescence switch which can select the appropriate solution according to the customer's experimental purpose. The electrochemical fluorescence switch technologies we provide are as follows:

We can provide the technology of immunofluorescence detection for paraffin section, frozen section, cell slide, tissue chip and so on.