Photoredox-mediated catalysis enables a variety of challenging synthetic transformations. Iridium complexes have been widely used as typical photocatalysts in photoredoxmediated organic reactions. Among them, iridium polypyridyl catalysts are very effective single electron transfer (SET) reagents due to their ability to engage in single electron transfer (SET) processes with organic substrates under the photoexcitation of visible light[1].

Iridium photocatalysts can be divided into the following two categories according to the ligands.

Homoleptic iridium photocatalysts refer to the same cyclometalated phenylpyridine for each ligand, and the mechanism during the reaction is described as an oxidative quenching mechanism. The excited state of *Ir(ppy)3 is capable of radical-radical coupling reactions, and SET reduction of electron-deficient cyanoarenes to generate arylated products. These reactions include α-arylation of amines, α-arylation of benzyl ethers and olefins, β-arylation of carbonyl groups, etc. 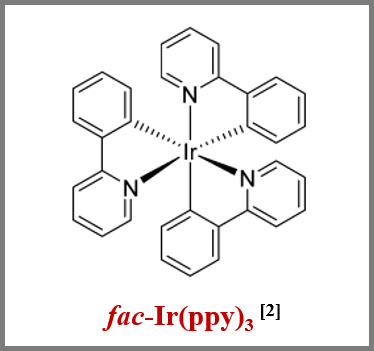 Cationic polypyridyl complexes of iridium(III) refer to Ir(ppy)2(N^N)+ type photocatalysts, containing a bipyridine-type ligand. Ir(ppy)2(bpy)+ is the simplest heteroleptic iridium photocatalytic agent that is used for sulfonamidation of aryl halides. Additionally, Ir(py)2(dtbbpy)+, the di-tert-butyl-substituted analogue, is another heteroleptic iridium photocatalyst. This catalyst not only enables the free radical coupling reaction of α-amino radicals with carbon-centered radicals, but also allows the direct alkylation of various heteroarenes.

Iridium catalysts have been used in reductive reactions such as radical cyclization, radical cyclization/rearrangement, and reduction of α-ketoepoxides. The catalyst Ir(ppy)3 has been shown to facilitate photoredox radical cyclizations of various alkyl, alkenyl or aryl iodide starting materials, generating a series of carbocyclic and heterocyclic structures. Besides, these free radical reactions can be capable of proceeding with rearrangements. For example, bromocyclopropane as a substrate for radical cyclization, can be catalyzed by iridium catalysts Ir(ppy)2(dtbbpy)PF6 to generate cyclized products with a tricyclic structure in good yields. And this iridium photocatalyst can also participate in the formation of C-C bonds. Under visible light irradiation, the substrate α-ketoepoxides is reduced to the corresponding radical intermediate by the iridium catalyst, and the intramolecular tandem ring-opening/allylation proceeded to obtain the product β-hydroxy-α-allylketone in good yield[1].

Alfa Chemistry provides a variety of Iridium catalysts and related services. If you can not find the product you need in the catalog, please don't hesitate to contact us with any questions or concerns, we will be happy to provide you with more detailed services.