In the environment in vivo/vitro, various ions play an important role, especially metal ions, the content of which is closely related to human health, in the environment, the existence of metal ions also greatly affect the ecological stability. Therefore, the detection of these metal ions requires a convenient, fast, sensitive and effective method with low toxicity. Ion probe has become a kind of detection technology favored by the majority of researchers, in a certain detection system, fluorescence parameters (such as fluorescence intensity, fluorescence lifetime or fluorescence spectrum, etc.) are changed due to the presence or concentration change of certain ions, so as to realize the detection of target ions. 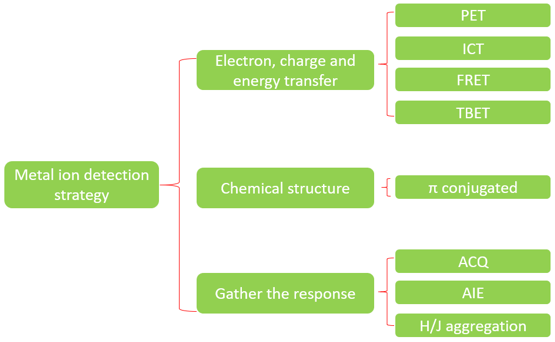 Ion probes have been widely used in the detection of Ca2+, Zn2+, Hg2+, Al3+, Cl-, ClO- and other special ions. Two types of metal ion probes that are commonly used are listed below.

Fig.2 A Zn2+ probe and its sensing mechanism[1]

In addition to the metal cation probes listed above, ion probes can also be used for the efficient detection of some special anions. Alfa chemistry provides various of ion probes and related services, including but not limited to those ion probes mentioned above. If you have any need, please contact us with no hesitated.