Given the biological fluorophores with biocompatibility, structural simplicity, and capacity to form a variety of functional nanostructures, these advantages endow them potential candidates as the next-generation bio-organic optical materials. Among them, fluorescent protein is one of the most important biological fluorophores and a key research tool in the field of chemical and biomedical research. By genetically fusing the fluorescent protein with the target protein of interest, almost any protein can be imaged by the optical microscope with sub-micron spatial resolution and sub-second temporal resolution in living cells or organisms, which helps us reveal the law and nature of the molecules and cells activities. 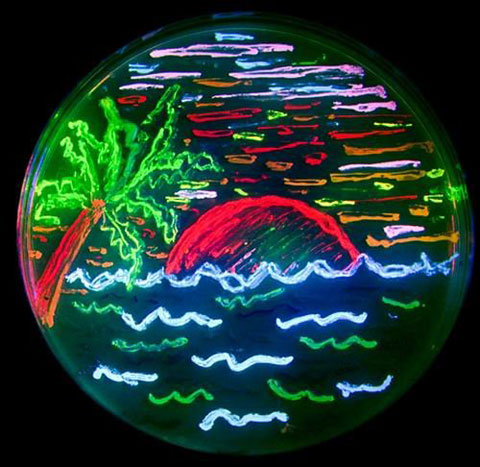 Since the green fluorescence proteins (GFP) was first accidentally discovered by Shimomura et al. in 1962,[1] more and more GFPs are appealing to a variety of biomedical and biotechnology applications, such as protein fusion, subcellular localization, cell visualization, protein-protein interaction, and genetically encoded sensors. It is known to us is that GFP is an endogenous protein derived from the bioluminescent jellyfish Aequorea Victoria. And The chromophore of p-hydroxybenzylidene-2,3-dimethylimidazolinone is the core motif of the GFP that is packaged in an abundant hydrogen-bonding cave and is responsible for the green fluorescence. In addition, the GFP is an invaluable tool in biological and biomedical fields and elucidates of biochemical trafficking of individual cells to entire organisms. In order to mimic the fluorescence of GFP, various compounds have been developed to adapt them for a fantastic range of applications, including GFP chromophores analogs, hydrogen bond-rich proteins, and aromatic peptidyl nanostructures that preclude free rotation of the aryl-alkene bond.

Given the red fluorescent protein (RFP) has longer excitation and emission wavelength, RFP has become an integral part of modern biological research and widely used in track proteins within cells, detect gene expression in vivo, act as acceptor chromophores in Förster resonance energy transfer, and transduce signal in biosensors.[2] The RFP derived from coral and sea anemones is genetically encoded fluorophores. Compared to other fluorescent proteins, RFP contain a p-hydroxybenzylideneimidazolinone chromophore that is conjugated to an acylimine group produced by oxidation of the backbone Ca-N bond in the N-terminal chromophore-forming residue. The chromophore extends p-conjugation and enable to absorb and emit light at longer wavelength. With these advantages, the RFP is useful for whole-animal imaging due to longer-wavelength light is less scattered by tissue and causes lower phototoxicity, enabling deeper imaging and longer acquisition times.

The yellow fluorescent proteins (YFP) is a small, water soluble protein which is responsible for the negative phototactility of the host organism-halophilic purple bacteria. The YFP is the heart of its photodynamics. The heart of its photodynamics is the phenolate form of a trans-4-hydroxy cinnamoyl moiety bound to the Cys69 residue of the protein backbone by a thioester bond.[3] That is to say, the photophysics of YFP is governed by a combination of the electron-withdrawing capacity of the carbonyl end substituent and the electron-donating capacity of the 4-phenolate group.

Alfa Chemistry is committed to providing a wide range of biological fluorophores, if you do not find what you need, please contact us.