Quantum dots (QDs) are nanoscale semiconductor particles with different optical and electronic properties from larger light-emitting diode particles. The electrons in a QD absorb energy and break away from the atom, creating a conductivity band. When these electrons fall back into the valence band they will emit different light. The color of light depends on the energy difference between the conductance and valence bands. Due to their highly tunable properties, QDs have received widespread attention. Their potential applications include transistors, solar cells, light emitting diodes, diode lasers and second harmonic generation, quantum computing, medical imaging and so on. 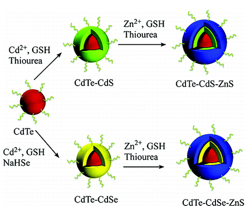 Alfa Chemistry provides various types of QDs, including cadmium-based QDs, cadmium-free QDs, perovskite QDs and other types of QDs and related services, please contact us if you have any need.