Photodynamic therapy (PDT) is a new type of photon-initiated treatment modality which is different from traditional cancer treatments (e.g. surgery, radiotherapy, chemotherapy). Photosensitizer is one of the most important factors in PDT. After decades of development, chemical properties of photosensitizer have become stable with less side effects. Meanwhile, the PDT gradually becomes a clinically promising therapeutic approach for the treatment of cancers due to its spatiotemporal selectivity and noninvasive nature. 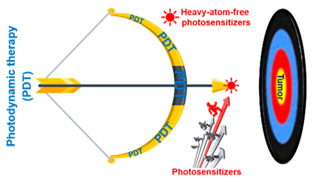 Since Robb first reported PDT in 1900, PDT has been continuously developed and widely used in clinical treatment. The following is the development process in the early stage of PDT.

PDT is a photochemical-based treatment approach, which contains the light and photosensitizers light-activated chemical. The photosensitizers gather around the diseased tissue and then irradiates the diseased tissue with a suitable light source. The photosensitizers absorb energy and transitions from the ground state to the excited state. A series of photochemical reactions produce a large amount of reactive oxygen species (ROS) with strong oxidizing properties, including singlet oxygen (1O2), hydroxyl radicals (OH-), hydrogen peroxide (H2O2) and superoxide anions (O2-).[1] Then, the ROS react with surrounding cells and cause cell necrosis and apoptosis. 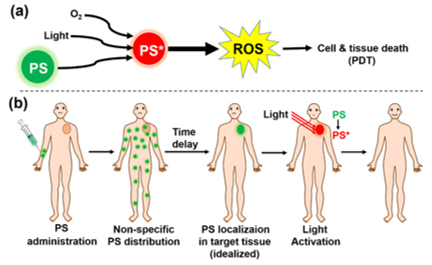 Figure 2. Schematic illustration of (a) the basic mechanism of PDT and (b) the general procedure for PDT in a clinical setting.

Compared to the traditional treatment protocols (e.g. chemotherapy, radiotherapy and surgery), the advantages of PDT are as follows.

Alfa Chemistry's technical R&D team has focused on the preparation and application of photosensitizers for many years, which has established long-term cooperative relationships with many well-known enterprises and research institutions. We have conducted research on various problems encountered by PDT, which can select the appropriate solution according to the customer's experimental purpose. If you want to know more about our products, please contact us.